2019 Commercial Real Estate Trends was recently covered by Bisnow. Recent research has generated 18 major trends in commercial real estate that are expected to be at the forefront of the industry in 2019. 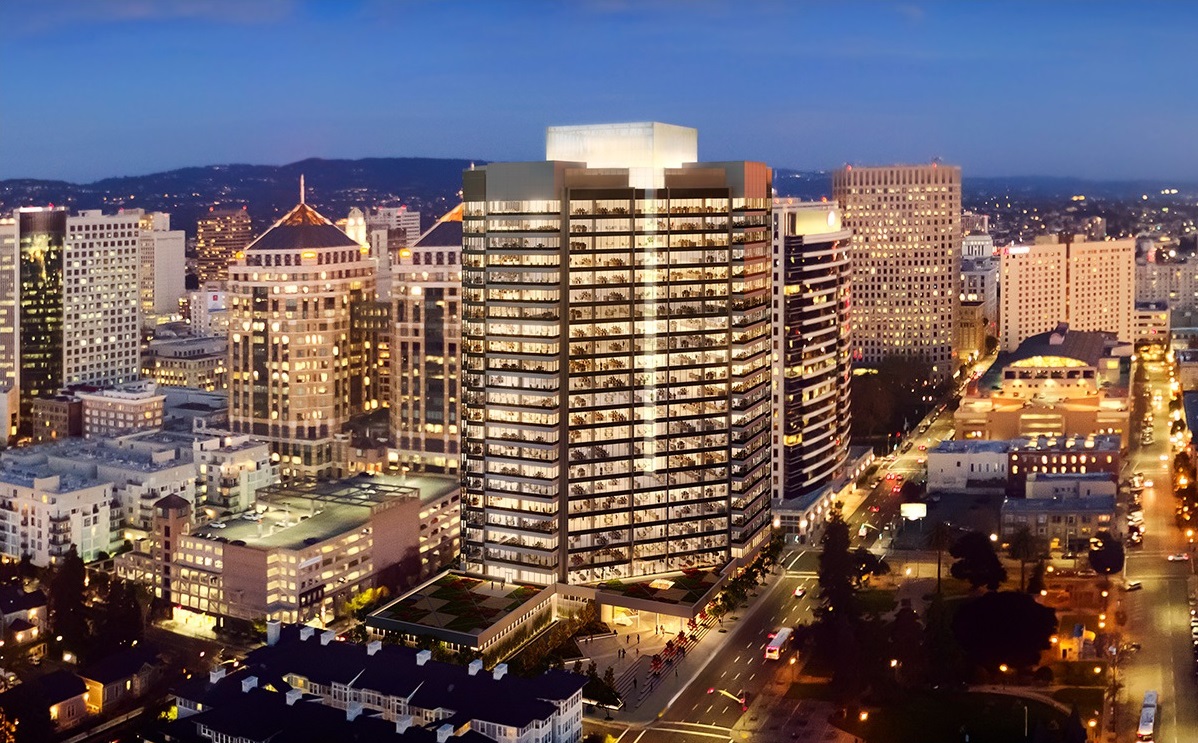 Oakland has recently drawn leases by tech firm, Square, and insurance giant, Blue Shield of California, that total more than half a million square feet. Additionally, developers are planning almost 1 million square feet in additional office space, the greatest amount of new development in more than a decade in Downtown Oakland.

The crime rate in Oakland began to rise in the 1960s and 1970s which contributed to the city’s difficulty with attracting businesses. Although, as tech companies such as Salesforce and Facebook expand across the Bay Area at record speed, Oakland is becoming a popular alternative destination for a millennial workforce- and companies want to capitalize on them. While some companies are expanding into the Tri-Valley area, many firms have recognized that if they want to attract employees, they need to be Downtown. Recent research has shown that millennials and younger people like a downtown environment, where they can easily go shopping on a lunch break or grab a drink after hours.

Even with the recent surge in companies looking for office space in Oakland, the area has a 10.3% office vacancy rate. The rate has risen almost 1 percentage point in the past year. Oakland is smaller and more affordable than its high profile neighbors, San Francisco, and Silicon Valley, both for office space and residents. Average office rent in Oakland is $55/square foot a year compared with about $73/square foot a year in San Francisco. Although part of what’s fueling Oakland has less to do with the city than it does with the spillover demand from San Francisco. Fewer than a handful of spaces are available for companies that want more than 100,000 square feet of office space in the city; the office vacancy rate is 6.5%.

Oakland could benefit from tenants priced out of San Francisco and from growing companies unable to secure a large block of space in San Francisco’s Financial District. Blue Shield of California will relocate a number of employees from San Francisco to Oakland in a 200,000 SF deal. Additionally, the 657,000 SF under construction in 2017 and the 345,000 SF under construction in 2018 are the first meaningful amounts of new building to get started since 2006. There has also been approval for a 750,000 SF office building that will take up a whole city block.

Tech firm, Square’s, recent lease of Uptown Station exemplifies Oakland’s ability to attract marquee tenants. The arrival of Square could signal to other tech companies that Oakland is the next frontier in the Bay Area. Commercial real estate in Oakland is surging with the recent sale of the Tribune Tower, an iconic Oakland building at 409 13th Street. It was recently sold to Highbridge Capital Management for $48 million, more than double the $20 million paid for it in 2016. “Oakland is committed to attracting businesses whose values align with our community, whose workforce reflects our inclusivity, and whose greatest priority is the long-term prosperity of every Oakland resident,” said Oakland Mayor Libby Schaaf.

The Tri-Valley has started to boom with more than 450 tech companies with locations in the area. The Tri-Valley encompasses six suburbs; Pleasanton, Livermore, Dublin, San Ramon, Danville, and Alamo; cities along the crossroads of Interstates 580 and 680. Now that so many tech companies have moved into the area, employment surged 35% from 2006-2016, outpacing both San Francisco and Silicon Valley.

Residents of the Tri-Valley cities have fought to preserve their communities, voting down development proposals and adopting a legal force field called an urban growth boundary to limit sprawl by drawing a perimeter for construction in certain areas. Although, many of the assets that made slow growers want to protect the Tri-Valley from the impacts of development- its location, open land, safe suburban neighborhoods, relatively affordable home prices, good schools, and transit options- are exactly the reasons for the region’s explosion.

Even before the tech companies exploded in the Tri-Valley area, the region boasted top-tier schools. Now, there are sky-high graduation rates of 97% and support from a community that allocated millions of dollars to updating school facilities and technology. The talent and level of education and the great schools there fuel the innovative ecosystem. One of the things that is most attractive to businesses looking at the region is that culture of innovation. When companies got wind of the Tri-Valley area that boasted an attractive talent pool, more affordable commercial rents, and enough space to promise shorter commutes they set up shop in the area.

Industry heavyweights such as Verizon, IBM, Chevron, Boeing, Morgan Stanley, and Walmart now have major offices in the area. This cut employees’ commute times to 30 minutes or less. In addition, there are public transit options in the works to connect the San Joaquin Valley and the Tri-Valley; the rail line is expected to be up and running by 2024. The Livermore Amador Valley Transit Authority (LAVTA) increased bus services to run more frequently and feed right into the BART stations in the area. Recently, LAVTA has even started testing driverless shuttles.

The boom in the Tri-Valley has put a surge on the housing market, with the typical home in the area being on the market for no more than 30 days. There were six times as many jobs as housing units created in the Tri-Valley between 2010 and 2015.

Looking at the Tri-Valley by the numbers; 27% of residents are under 20 years old and 361,000 people live in the area, which is above 5% of the Bay Area’s total population. 50% of residents with jobs outside the home commute 30 minutes or less, 19% of jobs are in tech sectors, and 60% of Tri-Valley residents have a bachelor’s degree or higher. 2% of students drop out of high school, there has been a 26% increase in the cost of living since 2007, the Tri-Valley boasts a $42 billion GDP, and 25% increase in wages since 2007.

The commercial real estate market in the East Bay is healthy and ripe for investment. In 2018, the East Bay opened 18.2 million square feet of office space — the most of any market in the nation. With all of the area demand for office space, vacancy has dropped slightly to 4.7% and the unemployment rate is at 3.1%. Keeping consistent with demand trends, research shows commercial real estate prices have risen sharply over the past five years, and in turn, rent prices continue to rise. The biggest driving force for the East Bay commercial real estate market is retail space. In 2018, the Walnut Creek retail market continued to boom with the opening of several new retail and dining spaces.

One of the Denver/Boulder market’s key drivers is the region’s significant tech presence. The metro area has seen an influx of major tech companies, including Facebook, Amazon, Apple, Marketo, and Slack, that have started developing offices in the area. Employment in the metro area went up 2.5% in 2018. Commercial real estate vacancy has risen to 5.9% in the Denver/Boulder area and rental rates have gone up 1.2%, slowed slightly by elevated vacancy. Even with increased vacancy, there has been a huge uptick in metro construction. At the midpoint of 2018, there was 6.5 million square feet under construction, with nearly 675,000 square feet of retail, far surpassing 2017.

The Oakland office market is one of the tightest in commercial real estate, with a 5.3% vacancy rate, just edging out San Francisco. Oakland benefits from the presence of the tech industry and tenant overflow from the Silicon Valley. With such a tight market, prices have risen about 16% over the past two years. Prices are expected to keep rising, with 1.5 million square feet of office space under construction in 2018 and plans underway to break ground on a new building that would rival San Francisco’s Salesforce Tower. On the industrial side, things have slowed down slightly in the past year. Industrial vacancy has risen to 4.2% and there is 5.3 million square feet under construction, a number that is expected to drop.

Commercial real estate in San Francisco has become very competitive, with all of major economic indicators pointing towards sustained, if not accelerating, levels of growth. Tech has become a major driver of the San Francisco market, as the city is home to the headquarters of tech giants Uber, Salesforce, and Yelp. Demand in the area is rising, because tech, start-up, and publicly traded companies alike grow so rapidly. There is only 6.8% office vacancy in the market, with 2.8 million square feet under construction in 2018. Much of the development is taking place in the SOMA neighborhood, where many of tech companies are located. Unemployment in San Francisco has dropped to 2.3%, the lowest rate among of PPC’s markets.

San Leandro’s commercial real estate market has been on the upswing over the past few years. One of the biggest commercial real estate transactions in the area was the 2018 purchase of Westgate Shopping Center by Blackstone Real Estate for $87 million. The complex is a big aspect of the San Leandro economy, having been both a center for retail and a hub for startups and creative businesses as well. Meanwhile, a 2018 study showed there was 27.8 million square feet of occupied and unoccupied industrial space in San Leandro, with a low 3.7% vacancy rate. Over the past three years, lease rates and building sales in the area have increased 25% to 30%.

Seattle is home to corporate giants Amazon, Starbucks, and Microsoft, and their presence is one of the driving forces in its commercial real estate market. With major companies like these in the metro area, the demand for Class A office space has risen dramatically over the past few years. Seattle has become the strongest real estate market in the nation and the third-best place to invest, mostly supported by the major companies headquartered in the Seattle metro area. Vacancy in industrial, office, and retail spaces have reached historic lows at 4.2%, 7.5%, and 9.1%, respectively. As a result of declining vacancy rates, rental rates are rising as high as $70/square foot.